More Reasons to Update to Java 7

Whether it be security fixes or security features, the attention paid to security in Java SE 6 and Java SE 7 has come at a price: it looks like Java 8 is likely to be delayed again (this time pushing General Availability to First Quarter 2014). In the blog post Java 8: Secure the train, Mark Reinhold writes, “Maintaining the security of the Java Platform always takes priority over developing new features, and so these efforts have inevitably taken engineers away from working on Java 8. … As a consequence of this renewed focus on security the Java 8 schedule, with a GA release in early September, is no longer achievable.” For people waiting to upgrade from Java 6 to skip to Java 8, this delay of Java 8 is another reason to consider upgrading to Java 7 now.

Although Oracle has been warning of the end of free availability of Java 6 updates since the beginning of the year and extended Public Updates multiple times, Henrik Stahl‘s post Oracle JDK 7u21 released with new security features states that “we are not planning any more public JDK 6 updates” (past Java 6 Update 45). Users of Java 6 are encouraged to migrate to Java 7 to continue receiving public updates. In his Question-and-Answer formatted post, Stahl also covers alternatives such as access to newer Java 6 releases via the appropriate support license (“Oracle middleware or applications customer”) or via separately purchased Java SE support. 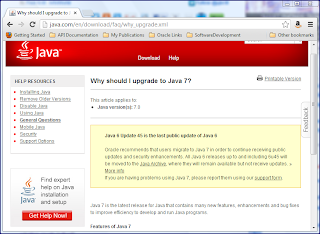 This entry was posted in Java (General), Java SE 7, Syndicated. Bookmark the permalink.