If you have spent much time browsing the web then the chances are good that you’ve already used PHP without even knowing it. Considering the incredible dynamic power of PHP and its remarkable flexibility, its transparency to the average user is a nothing short of astounding. With all of these advantages the most impressive fact might be that the language itself is open source and thus free. The only thing that does typically cost money is that PHP hosting.

The dynamic power of the language comes from its roots in other languages such as C and C++, with which PHP shares similar syntax. The major difference between PHP and languages such as C/C++ is that PHP runs on the server or host computer and the results can be displayed on the client terminal versus the entire software package being run on the clients computer. This is excellent for security sensitive applications such as e-commerce or generating verification images.

The power isn’t limited to security, it can be used for session management, and database connectivity. To this end most quality PHP hosting services offer some form of database hosting as well.

The power of PHP is all the more impressive in that it doesn’t come at the expense of client machines. Because the software is being run on the PHP host server, it is truly platform agnostic. The client can be running virtually any OS and any hardware. It won’t run and faster or slower on a high-end desktop than it would on a smartphone. That’s the power of having PHP hosted at work, and it opens up content to an entire community of web surfers, not just those running on specific platforms. 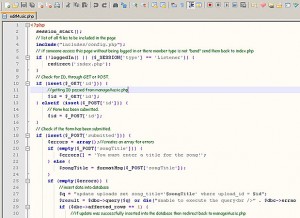 PHP is also flexible in that it can be easily integrated with almost any web-related software package of note. Everything from Flash to MySQL and even the ever present Java can all be integrated to work with PHP. From a program development standpoint this means that different programmers of programming teams can each focus on areas of expertise. A Flash programmer could either do the Flash and PHP programming or simply separate the two and have two programmers/teams each work on their own part of the task.

This separation could also be very practical for organizations wishing to outsource parts of their web development to specialists. The net result is that both development and maintaining a PHP powered site can be made a far easier task.

A potential benefit of running the any code on the server side is that in addition to being hardware/software agnostic, it is more or less transparent to the user. That is to say that the user never has to download any software required to utilize a PHP-driven site other than a supported browser. This is true no mater how developers extend their code, whether it be to link it to a dozen relational databases or e-commerce packages.
There are, of course some concerns to be had when running PHP code on a hosts site. The first and foremost should be the capacity and processing power.

If a company were to develop a new web site and want it to be hosted by an inexpensive PHP hosting service they shouldn’t necessarily expect to be able to have both high volumes of customers and complex code. There is a reason why web hosting services offer packages that scale from the very reasonable to the very expensive, and expecting something for nothing (or a lot for very little) probably isn’t a very reasonable expectation.
For PHP hosts it is difficult to quantify the amount of computational power available at any given time since most of them use heavily virtualized server farms where each machine is running numerous virtual private servers for numerous clients. As a result they may list generally available computing resources on lower-end packages, and it is often possible to secure completely dedicated servers at a higher price. It is not recommended that a company underestimate the need for proper hardware since their site could encounter problems under load that it may not experience during functionality testing simply because the hardware is insufficient to perform the same tasks when more users than expected attempt to use it. A good analogy is that a car might operate just fine with 5 people, but remove the people and fill it with cement and it won’t get very far if it doesn’t break immediately.

In short, PHP hosting is a way to run very powerful server-side language that enables developers to deploy feature rich, dynamic sites to virtually any platform capable of browsing the web.