I had a rough start to JavaOne 2012 similar to that at JavaOne 2010. It took 70 minutes for the people handling the check-in to provide me with a JavaOne badge due to “computer and printer technical difficulties.” Although I’m not the most patient person in the world, the part of this that was even more disappointing than the wait is that I missed being part of the “Community Session: For You – By You: Growing the NetBeans Community” panel at NetBeans Community Day at JavaOne 2012, something I was really looking forward to attending and participating in. I had arrived at Moscone West about 15 minutes before that panel was to begin, but did not end up getting my badge until well after the panel was over. In a disappointed mood, I headed to the Nob Hill Masonic Center (AKA Masonic Auditorium, AKA California Masonic Memorial Temple) on Nob Hill to attend the initial evening’s keynote address. 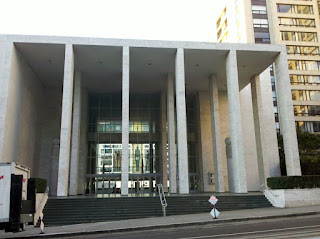 The first announcement was to “turn off all electronic devices.” After that announcement, a video was shown. I was happy that it was short. Hassan Risvi introduced the theme for JavaOne 2012: “Make the Future Java.” He showed slides indicating the 2012 Scorecard for three areas of Java’s strategy: technical innovation, community involvement, and Oracle leadership. 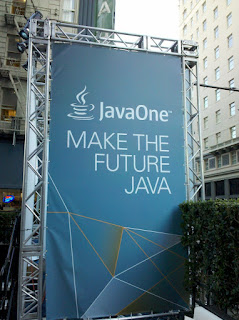 Georges Saab stated that Oracle has made Java available for more new platforms in the past year with JDK 7 than added in the previous ten years. He highlighted JDK 7’s adoption and talked about OpenJDK. One feature of JDK 8 that he highlighted is Project Nashorn, a JavaScript implementation taking advantage of invokedynamic for high performance with high interoperability with Java and the JVM. He announced that Project Nashorn will be contributed to OpenJDK. He stated that IBM, RedHat, and Twitter have already expressed support for Project Nashorn as part of OpenJDK.

Dierk König of Canoo and Navis were guest speakers at this Strategy Keynote. They talked about their use of JavaFX and the Canoo Dolphin project being open sourced.

Nandini Ramani talked about JavaFX and stated that its now available for all major platforms. She also cited the release of NetBeans 7.2 with integrated SceneBuilder as part of improved tooling. She also reminded the audience that JavaFX is now bundled with current versions of Java. Ramani announced that JavaFX is now available for Linux ARM. She mentioned that 3D is coming to JavaFX. It was also mentioned in this keynote that they expect JavaFX to be fully open source by the end of the calendar year.

AMD’s Phil Rogers talked about hardware trends moving from single-core CPUs to multi-core CPUs to GPUs using “a single piece of silicon and shared memory.” Saab and Rogers stated that Project Sumatra allows the JVM to be modified so that Java developers can take advantage of new features in the hardware with existing Java language skills. The JVM will be able to decide whether to run the Java code on a multi-CPU or multi-processor.

Ramani returned to the stage and mentioned two new recently announced releases: Java ME Embedded 3.2 and Java Embedded Suite 7.0. Axel Hansmann of Cinterion talked about his company’s use of Java ME Embedded.

Marc Brule of the Royal Canadian Mint joined Ramani on stage to talk about their use of Java Card: MintChip (“The Evolution of Currency”).

Cameron Purdy came to the stage to discuss Java EE. Purdy announced that the earliest releases of Java EE 7 SDK can be downloaded via GlassFish versions. Purdy also announced that GlassFish 4 already includes significant HTML 5 additions mentioned at JavaOne 2011. Purdy pointed out that NoSQL is not standardized yet (“you could call it ‘No Standard Databases'”) and pointed out that JPA already supports MongoDB and Oracle NoSQL with planned support for Cassandra and other NoSQL implementations. Purdy stated that April 2013 is the currently planned timeframe for release of Java EE 7.

Nicole Otto of Nike joined Purdy on stage and showed a brief video (FuelBand: “Life is a Sport: Make It Count”). She talked about Java EE being used to track data on activity. Purdy had a slide “Java EE 8 and beyond” that was sub-titled: “Standards-based cloud programming model.”

A short film was shown to introduce Dr. Robert Ballard (now I know why we were given the Alien Deep DVD upon entrance to the keynote). Dr. Ballard talked about his discovery of the Titanic and explained how the technology used for that discovery was like tying two tin cans together compared to the technology available today. The most laughter and applause of the night came to his statement that he hoped to find a spaceship in his explorations so that he never has to talk about discovering the Titanic again. Dr. Ballard stated that we should not sell science or engineering but should make it more personal to kids and sell scientists and engineers. He stated that “the battle for a scientist of engineer is over by the eighth grade.”

We moved, without break, directly into the IBM Keynote. Jason McGee (blog), an IBM representative, talked about “some of the things we’ve seen related to Java and the cloud.” He talked about “Java Challenges” as “share more,” “cooperate,” “use less” (resources), exploit technology. John Duimovich came to the stage to talk more about these four challenges “in context on the Java Virtual Machine.”

Duimovich talked about “shared classes cache” and AOT (Ahead of Time), described as “JIT code saved for next JVM). Duimovich also talked about multi-tenancy and supporting “isolation within a single JVM.” He had a slide on the Liberty Profile “for Web, OSGi, and Mobile Apps.”

Duimovich introduced “really cool hardware” called System z and explained the advantages of running Java (rather than C or C++) on this hardware. Duimovich stated that “Oracle and Java team together on Java, but compete head to head.” He pointed out that this “competition drives innovation” and is good for customers and developers.

McGee returned to the stage to talk about a few more themes, observations, and trends. He pointed out that “Java provides developers abstraction from underlying hardware,” but that “hardware is changing and evolving rapidly.” McGee’s slide stated that “both Java and Cloud need to enable the exploitation of these hardware advances while still preserving the ‘run anywhere’ benefit.”

Another McGee slide was titled “Java in a ploygot world…” and he used this slide to talk about the world transitioning from an all-Java enterprise world to today with applications written in numerous languages. He mentioned several alternative JVM-based languages and put a plug in for IBM’s X10 language. McGee believes that Java will be part of, but not all of, future enterprise applications.

This entry was posted in JavaOne 2012, Syndicated. Bookmark the permalink.