Do Bad Things Happen When Works Enter The Public Domain? The Data Says… No

It’s getting to be that time again, when Mickey Mouse gets closer and closer to the public domain — and you know what that means: a debate about copyright term extension. As you know, whenever Mickey is getting close to the public domain, Congress swoops in, at the behest of Disney, and extends copyright. 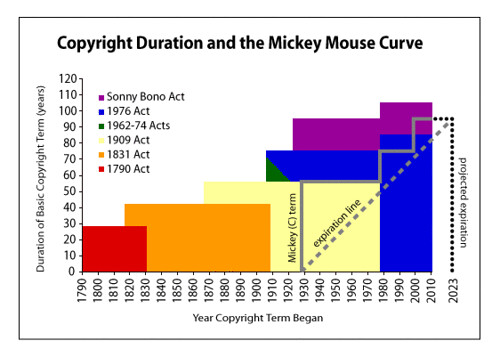 Copyright maximalists make a variety of arguments as to why such copyright extension is necessary. We’ve long argued that, even if you believe that longer copyrights are good, at most they should only be applied going forward, rather than retroactively. After all, the stated defense of why we have copyright in the first place is to create the incentives for creation — and once that work has been created, it’s clear that whatever incentive there was — whether via copyright or other external incentive — worked just fine. Extending a copyright on an already existing work, creates no new incentives for works already in existence.

However, maximalists have come up with a typical list of reasons for why they believe that copyright should be extended, and we should expect to start hearing those arguments made public again shortly, as the debate reemerges. Among the usual arguments are that (1) no one will produce those works any more, because the incentive is gone without the ability to exclude competition, and thus we’d have “under-exploited” works. (2) Quite contradictory to the first item, that because there’s no way to exclude, the content will be “over-exploited” because now everyone can use it, and thus the works will be everywhere, diminishing the value of the works. (3) That the works will be “tarnished” because once in the public domain, people will take the characters and… do bad things with them — whether it’s producing significantly inferior versions, or creating derivative works that somehow take away from the value of the original (such as by putting Mickey Mouse into pornographic situations).

Some new empirical research suggests that… none of these arguments are even close to being supportable. At all.

Michael Scott points us to the research by law professors Christopher Buccafusco and Paul Heald entitled Do Bad Things Happen When Works Enter the Public Domain?: Empirical Tests of Copyright Term Extension. The simple answer is, no, not at all:

Our data suggest that the three principal arguments in favor of copyright term extension—under-exploitation, over-exploitation, and tarnishment—are unsupported There seems little reason to fear that once works fall into the public domain, their value will be substantially reduced based on the amount or manner in which they are used. We do not claim that there are no costs to movement into the public domain, but, on the opposite side of the ledger, there are considerable benefits to users of open access to public domain works. We suspect that these benefits dramatically outweigh the costs.

How do they show this? Rather creatively, by looking at audiobooks for the years in which most works are in the public domain, and the same period of time after works are still under copyright: so they looked at the audiobook versions of best-selling books from 1913 to 1922 as public domain works, and similarly audiobooks of the best-selling books from 1923 to 1932 for similar works that were still under copyright. They did part of the research on all such works, and part on 20 works from each group that were deemed “durable” works by a group of experts — meaning books that are still popular and read today (such as James Joyce’s The Portrait of the Artist as a Young Man (public domain) and William Falkner’s The Sound and the Fury (not public domain)). Why audiobooks? Because audiobooks are a derivative work off of the original, which lets them also compare the impact on derivative works.

The results were pretty clear. Works in the public domain were much more available, but certainly weren’t flooding the market — so there’s little to support the “over-exploitation” argument. They were generally (though not always) cheaper, but not by a huge margin. And there were still “professional” versions of the reading, so the “under-exploitation” argument fails as well. In terms of quality and tarnishment, they ran another series of experiments comparing professionally read ebooks to amateur read ones, and again found nothing to support that public domain works are treated poorly.

Our data provide almost no support for the arguments made by proponents of copyright term extension that once works fall into the public domain they will be produced in poor quality versions that will undermine their cultural or economic value. Our data indicate no statistically significant difference, for example, between the listeners’ judgments of the quality of professional audiobook readers of copyrighted and public domain texts.

In the end, the full study is worth reading, but the results are clear. The so-called “harm” of works falling into the public domain does not appear to exist. Works are still offered (in fact, they’re more available to the public, who we’re told is what copyright is supposed to do), there are still quality works offered, and the works are not overly exploited. So what argument is there left to extend copyright?