Kevin Smith Explains Why He Had To Waste $9,316 On Movie Ads That He Didn’t Want Or Need

We’ve been covering for a while entertainer Kevin Smith’s business model experiments, which rely heavily on his wonderful ability to connect with fans. We’ve also been fascinated with his more recent decisions to buck “the old way” of doing things and to focus on marketing his latest film, Red State, in a way that he thought made more sense. So far, that’s meant a very cool (and quite profitable) plan for Smith to tour with Red State and to combine his usual (wonderful) Q&A sessions with showings of the film. Another part of the plan is getting the film out there in as convenient a way as possible, meaning a video on demand release before the wider theatrical release.

One of the key points of this plan was that he wasn’t going to fall into the trap of wasting money on advertising. So far, everything that he’s done has been built off of word of mouth — in large part from his Twitter feed and his growing network of podcasts (I used to listen to nearly all of them, but can’t keep up any more). And it’s worked out great. Crowds continue to flock to see him, and the movie is getting plenty of buzz among the folks its targeted at. However, he’s finally made an exception to the “no advertising” rule, though he’s somewhat annoyed that he had to do this. If you’ve heard him speak about Red State, you’ve heard him talk about a few of the top notch performances that came out of the film, and Smith and some others think that perhaps some of those performances are “Oscar-worthy.” But… the Motion Picture Academy is not known for changing with the times or being willing to adapt to the way films are watched these days. So it “requires” certain things to happen to have a movie “qualify” for the Academy Awards, and that apparently includes a week’s worth of screenings at a “real” theater… and newspaper advertising. Why? Who the hell knows. Just don’t question the Academy.

So, in a blog post detailing the financial results of the week of shows at Quentin Tarantino’s New Beverly Cinema, he also explained why they had to totally waste $9,316 on ads that didn’t bring anyone new to the theater:

Per the AMPAS rules that govern the qualification for the Oscars, paid ads needed to run in conjunction with a seven day, official theatrical engagement. This was a bitter pill to swallow, as we’ve sold lots of Red State tickets all year long without running a single paid ad. But a rule’s a rule, so after the AMPAS folks signed off on the New Beverly for the home of our Los Angeles run, we spent $9,316 on newspaper ads.

It still makes me queasy – solely because it’s money not well-spent. We’d sold out all of our weekend screenings before the ad ever ran in either of the three papers we bought space in: the LA Weekly (six inch ad), the LA Times (same), and the west coast edition of the NY Times (1/2 page ad). 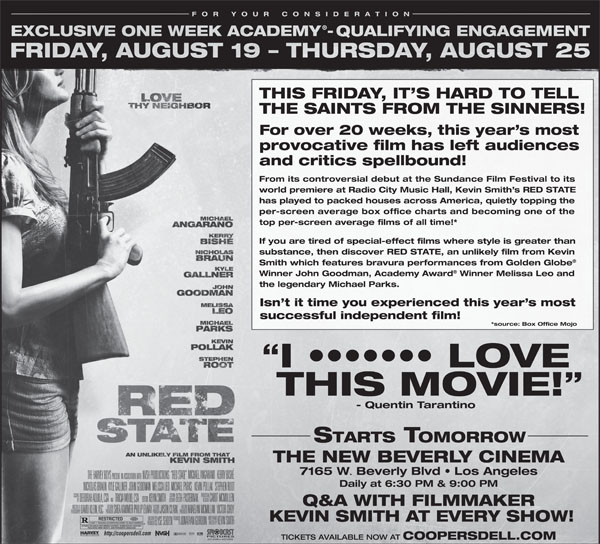 Comparing the take on various live showings that he’s been doing, Smith notes that two shows he did last week in Texas basically “covered” the cost of the ads, which seems pretty silly. You’re supposed to be advertising to make more money, not making money to pay for the ads you don’t want. But such is the legacy structure of the movie industry these days.

Separately, we greatly appreciate the fact that Smith is willing to be so open about the financial results, which helps give more people the details needed to understand how these industries work. It’s so rare that people doing these kinds of experiments are willing to reveal any numbers, so it’s refreshing to see him being so open. The only thing that would be even better is if he could also open up about some of the costs, so we can get a better idea of the net results, rather than just the gross. Obviously, the theater takes a cut of some of this stuff, and that would be useful for others contemplating following in his footsteps. But, still it’s great to see this kind of openness:

we ran the flick for a week at Quentin Tarantino’s New Beverly Cinema in Los Angeles (big thanks to Julia!), where we did two screenings a night, which I followed with 30 minute Q&A’s. Tickets were $20 for the Friday to Wednesday screenings and were followed by post-show Q&A’s with Fatty McNoFly, scourge of the skies.

Since few movie sites ever wanna include us in their box office wrap-up pieces (nor mention that we had the highest per screen average for the last two weeks), here’s the financials for how Red State performed that week…

On Thursday, I didn’t Q&A after the screenings at all, as per AMPAS rules (regarding leaving filmmaker-free screenings open for Academy members so they can watch the flick without influence). Thursday’s ticket price was only $7 for the movie only ($7 is the normal New Beverly admission price, although usually that’s for a non-first-run double-feature). Even that did solid numbers…

Of the 2,675 seats available from Friday to Wednesday, we sold 2,580. From Friday to Wednesday, over the course of twelve screenings, merely 95 seats ever sat empty. Had our start time been 7:30 each night, we likely would’ve sold those seats as well (it’s a bitch getting anybody out in L.A., let alone at 6:30 at night; folks are still getting home from work).

Ah, but isn’t the movie industry dying? That’s what the MPAA keeps telling us. And yet, if you connect with fans and give them a real reason to buy, it seems they don’t mind buying… Shocking, I know…