How Google Voice got me out of a bind

For this editor, a broken cell phone plus Google Voice adds up to a quick, smart way out of a communications dead zone.

Skype 2.0 for iPhone: Is the subscription worth it?

An update to Skype’s iPhone app opens the door to 3G calling, but after a trial period, callers will have to pay up.

Posted in Syndicated | Comments Off on Skype 2.0 for iPhone: Is the subscription worth it?

I had recently posted on Win the Latest Manning EBooks and Win the Latest O’Reilly EBooks. This GiveAway was from http://www.dotnetcurry.com/ to celebrate its 3 years.

Here are the winners of the DotNetCurry 3rd Anniversary GiveAway. Congratulations to all the winners! You will be contacted via Twitter within the next 48 hours. Make sure you check your Twitter Direct Messages from @DotNetCurry. For those who could not win, there will be contests in the near future too. So continue to Follow DotNetCurry on Twitter .

Congratulations once again to all the winners! You will be contacted via Twitter within the next 48 hours. Make sure you check your Twitter Direct Messages from @DotNetCurry

Drag things, pick colors, make a nice class for your buttons… introducing the Button Maker. Boy, that’s a nice button right there. I’m saying “CSS3″, because these make use of gradients, shadows, and rounded corners which contribute greatly to their button-ness. In older browers that don’t support these properties, the fallback is solid-color background, no […] Continue reading →

Posted in Article, Syndicated | Comments Off on CSS3 Button Maker

When the user tries to submit the form without selecting a checkbox, the validation fires and the following error message gets displayed

Posted in ASP.Net, jQuery, Syndicated | Comments Off on Using the jQuery Validation Plugin to choose atleast one CheckBox before submitting the Form

Use Google’s Images search to grab big pictures for desktop wallpapers and the like? A new Firefox extension might save you some time.

If you have customized your VS 2008/2010 environment with a new font size , color, theme etc. and now want to share these settings with other team members on your network to maintain consistency, then Visual Studio allows you to create a single .vssettings file and share it with your team members.

Here are the steps to do so:

Open Visual Studio 2010 > Go to Tools > Options > Environment > Import and Export Settings. Save the file to a local folder or a UNC share. I have called the file VSCsharpSettings.vssettings

Now to apply these settings to a workgroup, go to a workgroup machine, open Visual Studio 2010 > Go to Tools > Options > Environment > Import and Export Settings > Check the checkbox saying use team settings file and enter the path where the original VSCsharpSettings.vssettings file was saved (UNC or local path) and click Ok. You will now see that all the IDE’s on the workgroup that imported this setting file have the new settings applied. 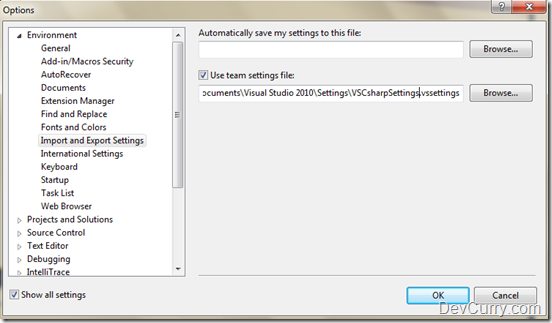 In future, whenever you update this setting file, all the other IDE’s on the workgroup that are using this settings file will automatically use the updated category specified in the .vssettings file.

Note: The settings file imported through the Team Settings File option allows developers to keep the customizations they have made to the IDE. It only overrides the category specified in the .vssettings file.

Simon was the first of a few of you to send over a blog post by author Joe Konrath discussing why he doesn’t worry much about his books being available online via unauthorized file sharing avenues. The whole blog post is so reasonable and well argued that you really should just go read the whole thing, so here are a few snippets to get you interested:

People want to share files. There is this much file sharing going on for a reason. It’s what people want. Fighting piracy is fighting human nature. This is a battle no one can win. Getting your undies in a bunch at the thought of someone copying your ebook is a waste of a good ulcer. Worry about some problem that eventually will be solved. Like world hunger. Or cancer. Or war. Those will be conquered before file sharing is….

There is ZERO reliable evidence that file-sharing hurts sales. A shared file does not equal a lost sale, any more than someone reading a library book is a lost sale.

The best part is a bit later in the post, where he tries to pre-empt the usual “but it’s theft!!!!” arguments with a series of Q&As that read something like many of the comment exchanges we end up having here at Techdirt, by pointing out that it’s not the same as stealing a tangible object, and even so it doesn’t matter. He also takes on another popular argument made in our comments: but what if artists don’t want to embrace new business models:

Q: But Joe, if everyone steals your ebooks, how will you make money?

A: Show me an artist bankrupted by piracy, and we’ll revisit this question.

Q: No, seriously, in a future where everything is free, how will…

A: We’re not in a future where everything is free. But I’ll play the “let’s pretend” game. Let’s pretend that all ebooks are free. How will writers make money? The same way all media makes money. Advertising, merchandising, and licensing.

Q: But I don’t want ads in ebooks.

A: I don’t want ads in anything. But that’s how capitalism works. Deal with it.

Again, the whole thing is a worthwhile read, but highlights a key point that we keep trying to make over and over again. So many keep focusing in on the whole “piracy!” aspect, and that’s such a huge waste of time. Why focus on trying to stop something you don’t like, when you can put your energy into creating a positive situation that you do like? Why focus on trying to punish people you don’t like, when you have so many opportunities to happily engage with people you do like?

Michael Scott points us to one of the best summaries I’ve seen of the state of the music business today — published in the ABA Journal. It’s an incredibly balanced piece, that really does carefully present both sides of the story on a variety of issues, and presents actual evidence, which suggests the RIAA is blowing smoke on a lot of its claims. The piece kicks off by highlighting that the music industry appears to be thriving, and then noting that it’s not the same as the recording industry, which has been struggling.

Much of the piece does present the RIAA’s viewpoint on things, such as the idea that the legal strategy the labels have taken has been a “success.” However, it follows it up by questioning what kind of success it has been when more people are file sharing and more services are available for those who want to file share. From there it segues into a discussion on “three strikes” and ACTA, which includes the jaw-dropping claim from an RIAA general counsel that “three strikes” was “never even put on the table.” I’ve heard from numerous ISP folks who say that’s not true at all. However, the article does a good job (gently) ripping apart the RIAA’s claims, with evidence to the contrary, and does a beautiful job digging deep into ACTA to show how the text might not explicitly require three strikes, but is worded in such a way as to make it hard to qualify for safe harbors without implementing three strikes.

The latter part of the article then focuses on how the music industry really is booming, and how more people are making music, and there are lots of opportunities for musicians to do well these days, even without relying on copyright law. The arguments made (and the people and studies quoted) won’t be new to regular Techdirt readers, but it really is a very strong piece, targeted at lawyers (many of whom may not have realized some of these details). For example:

I certainly don’t agree with everything in the article, and there are a few statements from the RIAA folks that could have been challenged more directly. But, on the whole, it’s definitely one of the better articles I’ve seen looking at the music industry from the perspective of the legal profession that doesn’t automatically drop into the “but we must protect copyrights!” argument from the outset.